For all those of you who responded to my last posting, here are the words of Joni Mitchell herself regarding Matala in Crete and the song ‘Carey’. It appears that Joni was in Matala, Crete around 1968/69 – three years after 1966 when I went there and it seems that it had developed a bit from my time. . . . 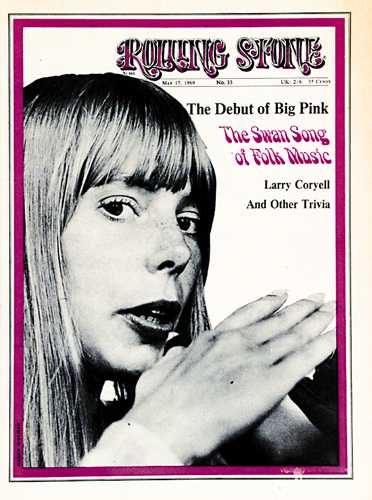 “Matala was a very small bay with cliffs on two sides. And between the two cliffs, on the beach, there were about four or five small buildings. There were also a few fishermen huts.

“The caves were on high sedimentary cliffs, sandstone, a lot of seashells in it. The caves were carved out by the Minoans hundreds of years ago. Then they were used later on for leper caves. Then after that the Romans came, and they used them for burial crypts. Then some of them were filled in and sealed up for a long time. People began living there, beatniks, in the fifties. Kids gradually dug out more rooms. There were some people there who were wearing human teeth necklaces around their necks,” she said with a slight frown.

“The village pretty well survived from the tourist trade, which was the kids that lived in the caves. I don’t know what their business was before people came. There were a couple of fishing boats that went out, that got enough fish to supply the two restaurants there.

“The bakery lady who had the grocery store there had fresh bread, fresh rice pudding, made nice yogurt every day, did a thriving business; and ended up just before I left, she installed a refrigerator. She had the only cold drinks in town. It was all chrome and glass. It was a symbol of her success.

Then during a performance at The Troubadour, Joni introduced the song “Carey” with the following story (transcribed from the tape by Kakki).

“I went to Greece a couple years ago and over there I met a very unforgettable character. I have a hard time remembering people’s names like so I have to remember things by association, even unforgettable characters, I have to remember by association, so his name was “Carrot” Raditz, Carey Raditz, and oh, he’s a great character. He’s got sort of a flaming red personality, and flaming red hair and a flaming red appetite for red wine and he fancied himself to be a gourmet cook, you know, if he could be a gourmet cook in a cave in Matala. And he announced to my girlfriend and I the day that we met him that he was the best cook in the area and he actually was working at the time I met him – he was working at this place called the Delphini restaurant – until it exploded, singed half of the hair off of his beard and his legs, and scorched his turban, melted down his golden earrings.

Anyway, one day he decided he was going to cook up a feast, you know, so we had to go to market because like in the village of Matala there was one woman who kind of had a monopoly – well actually there were three grocery stores but she really had a monopoly and because of her success and her affluence she had the only cold storage in the village, too, so she had all the fresh vegetables and all the cold soft drinks and she could make the yogurt last a longer than anyone else, and we didn’t feel like giving her any business that day. Rather than giving her our business we decided to walk ten miles to the nearest market.

So I had ruined the pair of boots that I’d brought with me from the city because they were really “citified” kind of slick city boots that were meant to walk on flat surfaces. The first night there we drank some Raki and I tried to climb the mountain and that was the end of those shoes. So he lent me these boots of his which were like Li’l Abner boots – like those big lace-up walking boots and a pair of Afghani socks which made my feet all purple at the end of the day and I laced them up around my ankles and I couldn’t touch any – the only place my foot touched was on the bottom, you know, there was nothing rubbing in the back or the sides – they were huge and he wasn’t very tall, either, come to think of it was kind of strange – I guess he had sort of webbed feet or something but we started off on this long trek to the village, I forget the name of it now, between Matala and Iraklion – and started off in the cool of the morning and by the time we got halfway there we were just sweltering me in these thick Afghani socks and heavy woollens and everything, so we went into the ruins of King Phestos’s palace to sit down and have a little bit of a rest and while we were there these two tourist buses pulled up and everybody got off the buses in kind of an unusual symmetry, you know, they all sort of walked alike and talked alike and they all kind of looked alike and they all filed over to a series of rubblely rocks- a wall that was beginning to crumble – lined themselves up in a row and took out their viewing glasses, overgrown opera glasses, and they started looking at the sky and suddenly this little speck appeared on the horizon that came closer and closer, this little black speck.

Cary was standing behind all of this leaning on his cane and as it came into view he suddenly broke the silence of this big crowd and he yells out “it’s ah MAAGPIE” in his best North Carolina drawl. And suddenly all the glasses went down in symmetry and everybody’s heads turned around to reveal that they were all very birdlike looking people. They had long skinny noses – really – they had been watching birds so long that they looked like them, you know – and this one woman turned around and she says to him (in British accent) “it’s NOT a magpie – it’s a crooked crow.” Then she very slowly and distinctly turned her head back, picked up her glasses and so did everybody else and we kept on walking. Bought two kilos of fish which would have rotted in the cave hadn’t it been for the cats.

When we got back from that walk Stelios, who was the guy who ran the Mermaid Cafe, had decided to put an addition on his kitchen which turned out to be really illegal and it was so illegal, as a matter of fact, that the Junta dragged him off to jail and torture was legal over there – they burnt his hands and his feet with cigarette butts mainly because they hated, you know, all of the Canadians and Americans and wandering Germans living in the caves but they couldn’t get them out of there because it was controlled by the same archaeologist that controlled the ruins of King Phestos’s palace and he didn’t mind you living there as long as you didn’t Day-Glo all of the caves and everyone was like putting all of their psychedelia over all this ancient writing. So they carted him off to jail…” (End of tape)

267 thoughts on “Matala and Joni Mitchell.”

Translate to your language

My Photos of Crete

Stats for this Site